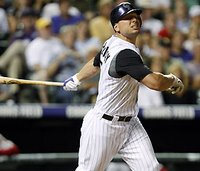 Rockies GM Dan O'Dowd said the Rockies will try to trade Matt Holliday while his value is high. Holliday is set make 13.5 million dollars next season, but will be in a contract year. Boras will definitely send him to the open market, so any team that trades for him will not be forced to give up several top prospects. Furthermore, any team that trades for him would probably ask for exclusive negotiating rights to lock him up long term. Holliday is turning into a solid hitter who can hit for average and power. While he will likely stay in the 25-35 homerun range, he is a good fielder with great speed, so he is fairly valuable. A deal similar to Carlos Beltran's (7/119) would probably get it done. So 17-18 million dollars annually would probably get the job done. Here are a couple teams that may look to trade for him:
Cardinals: The Cardinals are looking for a corner outfielder and could trade for the left fielder. They have a couple solid prospects they could package a deal around, as well as the money to lock him up. Imagine Holliday-Pujols-Ludwick in the 3-4-5 spot.
Phillies: If the Phillies lose Pat Burrell, expect them to be all over the Matt Holliday talks. They have solid prospects and would benefit from Holliday in their lineup. However, Burrell is a clubhouse leader and they might not want to bring on two uncertain contracts (Howard).
Mets: If the Mets are that desperate, they could go out and trade for Matt Holliay. It would probably cost them John Niese or Fernando Martinez, but it would make them a lot better. They will probably talk with the Rockies, but nothing more than that. They have too many big contracts right now.
Braves: The Braves say they won't trade their top prospects for Peavy, but would they do it for Holliday? Not likely. However, if the Braves could package some low level prospects with someone like Jeff Francoeur or Kelly Johnson, maybe a deal would get done.
Orioles: The Orioles are shopping some of their players around and could target the Rockies to make a big time trade. Dangling George Sherrill and Brian Roberts for Holliday, a prospect, and cash would be a deal that would greatly help both teams.
Yankees: If the Yankees are willing to trade Phil Hughes or Ian Kennedy, they could package a small deal for Holliday. I'm sure they will look into it, but they would like to spend their money elsewhere this year.
Twins: The Twins have one of the best minor league systems in baseball and could afford to make a trade for a power hitter like Holliday. Signing Holliday long term, especially with their new stadium, would put them back on top in that division, especially if their young pitchers keep improving.
The Rockies seemed determine to trade Holliday, so expect this to be the "Winter Meetings Trade" of 2008.
This story was approved by MLB Rumors.