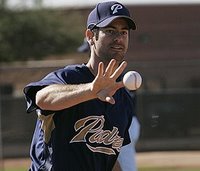 According to Buster Olney, Padres pitcher Mark Prior will be ready for the start of the 2009 season. Not only that, but he is expected to explore the market. Prior reportedly feels good, but how many times has he said that since he first got hurt back in 2005. The Astros were very interested in Prior last year and may jump in on him now that he is "healthy." Prior, 28, has the make up of an ace, and if he can give any team fifteen starts, it will be a success. The Astros, who have decent pitching but would benefit from Prior, may make a move on him hoping that he is healthy.
It is worth a shot.
This story was approved by MLB Rumors.