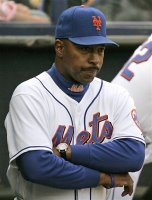 According to the NY Daily News, there is mutual interest between the Brewers and Willie Randolph about their managing position. While Randolph is drawing interest from the Nationals and Yankees, I'm sure managing a team like the Brewers would entice him. Randolph lead the Mets to an NL East title in 2006, but fell short in 2007 and failed to get the team going in 2008. The media was on him a lot in New York, so he might fair better in Milwaukee where the media isn't as intense. Another candidate, Bob Brenly, is currently the Cubs' broadcaster. He is very familiar with the Brewers' make up and the media loves him, as well as the whole NL Central. The media is also a big fan of Brenly, who he knows well from working with them in Chicago.
Other candidates include Ken Macha and Buck Showalter.
This story was approved by MLB Rumors.