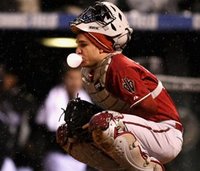 The Red Sox will explore the market for a young catcher this offseason, in hopes of finding someone who can take over by 2011 or 2012 full time. The Red Sox could trade one of their better pitching prospects for someone like Jeff Clement, who could take over full time as soon as 2010.
John Perrotto suspects the Red Sox will give Jason Varitek a two year deal, but I think they would be smart to trade for someone like Miguel Montero, who has a strong swing that could improve him numbers if he played in Fenway Park. Platooning Varitek and Montero would make for a solid tandem, especially if Montero finally breaks out at the plate. He has handled three aces very well (Haren, Webb, and Johnson) this season and is likely up for the challenge.
Other options include Kelly Shoppach, Jarrod Saltalamacchia, and Ryan Doumit.
This story was approved by MLB Rumors.