Sherman: Yankees Have A Plan

Share All sharing options for: Sherman: Yankees Have A Plan 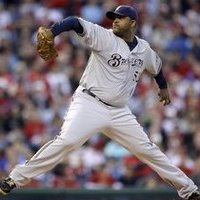 According to Joel Sherman of the NY Post, the Yankees have about 90 million dollars available and plan to spend it on the market. Of the pitchers available, they would like to sign two of the top three pitchers: CC Sabathia, A.J. Burnett, and Derek Lowe. While the list grows if one of those players goes elsewhere, the point is they would like to sign two top of the line pitchers. As for Mike Mussina and Andy Pettitte, they will make the players similar offers and whoever takes it first is the one they are going to go with. Mussina has actually faired better than Pettitte over the past year or so, putting up better numbers and focusing on the Yankees, instead of whether or not to retire.
Since Pettitte has come back to the Yankees, we've seen nearly a two point drop in K/9, a thirty point increase in AVG, and a full point increase in BB/9. As for Mussina, he returned to 2006 form this year and looked even better. 2007 was a minor hiccup, where he tried to hard to make the adjust to finesse, and it showed. He was trying to strikeout batters a lot more, and it lead to him getting hit a lot harder. While Pettitte is younger and probably has a couple years left, him struggling may put more of a focus on retiring, where as Mussina seems fine with pitching another year or two before hanging it up.

The third step in the Yankees prospect is to trade a pitching prospect or two for a solid first baseman or corner outfielder. It is possible that the Yankees will trade Phil Hughes, Ian Kennedy, Jeff Marquez, or Dellin Betances in a package for someone like Prince Fielder or Derrek Lee, if they do pursue a first baseman. If they want a corner outfielder, they could go after Matt Holliday of the Rockies. Other options include Matt Kemp, Hunter Pence, and Magglio Ordonez, among others.
It is possible they will go after a high profile outfielder and sign a first baseman like Sean Casey or Tony Clark, opening the way for prospect Juan Miranda, assuming he does well in Triple-A to start next season.
This story was approved by MLB Rumors.