Share All sharing options for: Source: Brewers To Pick Macha 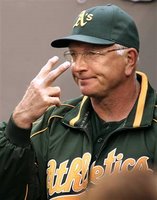 According to one NL executive, the Brewers will pick Ken Macha as their new manager. The Brewers were reportedly down to three canidates - Ken Macha, Bob Brenly, and Willie Randolph - but have decided internally to go with Macha. Bob Brenly has been out of managing for some time, but many believe he would be a great manager given a second chance. As for Randolph, he would probably do well with a second chance, but was not very good with the media and some of his players.
While Macha is not the best with the media, he is an experienced veteran and knows who the best available coaches are, so he will surround himself with good people. An official announcement is expected to come sometime in the days following the World Series.
This story was approved by MLB Rumors.