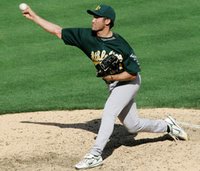 According to Indians.com, Athletics closer Huston Street could be an Indians target this offseason as they look for a closer. The Indians plan to spend some money on the market this offseason, but will likely target an outfielder or second baseman with that money. The Athletics have shopped Huston Street around since last year, and he probably would have been traded by now if it weren't for the A's high asking price.
The A's might have trouble trading him this offseason because they A's have a closer in Zeigler, and are shopping a closer who has failed to break twenty saves since 2006. The Indians would likely be willing to trade two or three prospects, but won't go past three, unless the prospects are low level with little upside. The A's are looking for a corner infielder this offseason as well as some pitching help. They would be smart to look at some of the arbitration eligibles available around the league in hopes of finding a bargain. Mark Teahen is a guy the Athletics could try to make a play for. He is young and has some upside, despite hitting just .255 this past season.
This story was approved by MLB Rumors.