Share All sharing options for: Varitek to Blue Jays? 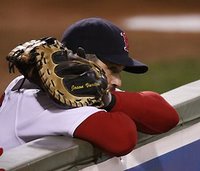 Jason Varitek is likely entering his last game as Red Sox. He hit .220 with 13 HR in 131 games this season. He's been declining for the past three seasons, and it is obvious in his power numbers and a forty point drop in his batting average. Varitek is making nine million dollars this year, but will likely have to take a major pay cut if he wants to play in 2009. He was in the bottom half in nearly every category when it comes to catchers, so he might earn nearly 2-4 million dollars for one year. With that said, the Blue Jays are in the market for a catcher and may look to Varitek's veteran know-how and leadership to help some of the Blue Jays younger pitchers.
According to a source, the Nationals and Mariners are also considering a run at a catcher.
This story was approved by MLB Rumors.