Where Will Martinez Go?

Share All sharing options for: Where Will Martinez Go? 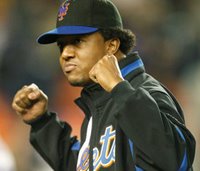 According to MLB.com's Marty Noble, the Mets will likely let Pedro Martinez walk now that his four year contract has expired. Martinez was 5-6 with a 5.61 ERA in 20 games this season, but lost stamina and velocity on his fastball. I think Martinez will look to play, but it would have to be an incentive laden deal because shoulder problems could come back again. As for teams that could be interested, the Indians could take a chance on him in hopes that he has success similar to what Paul Byrd had for the Indians in 2007 and 2008. The Orioles pursued him nearly ten years ago and could take a chance, but that is probably unlikely.
If Martinez is willing to take a huge pay cut, several more teams will probably give him a shot. Otherwise, his career might be over.
This story was approved by MLB Rumors.