With Godfrey Out, Is Ricciardi Next?

Share All sharing options for: With Godfrey Out, Is Ricciardi Next? 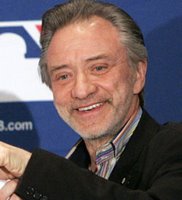 It was made official today, Toronto Blue Jays President Paul Godfrey will not be coming back for the 2009 MLB season. Godfrey, who's been the team President since 2000, has been a major factor for the club since Day 1, being a key member in bring baseball to Toronto in 1976. Godfrey was a good President for the most part but unfortunately his intuition towards hiring capable individuals to run the team are below average at best. He was also too involved in the team media wise, constantly in the public view and while doing so, never actually answering any of the media's questions and always finding ways around them.
What does this mean for Jays GM JP Ricciardi? He has an opt-clause in his five year extension, which he signed back in 2005, that allows him to leave if Godfrey is no longer team President. Will he use his clause to leave on his own note instead of being fired when the new President is appointed? It would be a wise decision for Ricciardi to leave on his own terms after the World Series.
There has yet to be any word about Godfrey's replacement, but one possibility the Jays could look into is Pat Gillick. Bringing in a guy like Gillick would give the Jays a proven winner in the front office, instant credibility, and more importantly, an experienced Front Office man. For the past three seasons, Jays owner Ted Rogers has been saying he wants to build the Jays into a perennial World Series contender. Having Gillick would be a step in the right direction.


Posted by Will M.
This story was approved by MLB Rumors.