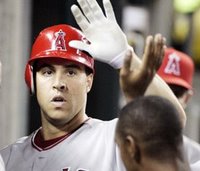 Could the Angels possibly add forty-five million dollars in payroll by signing just two players? The Angels are reportedly looking to sign both Mark Teixeira and CC Sabathia, but view Teixeira as their number one priority. The Angels payroll at the start of the 2008 season was at 119 million dollars, and while losing Rodriguez and Anderson will bring that down, several players will see their salaries increase, which brings it right back to nearly 115 million dollars. The Angels have a team compiled of All-Stars, and bringing in CC Sabathia might not be worth their while, despite the strong finish he had last season.
Bringing in an established veteran like Derek Lowe would be cheaper and possibly better for the Angels. Lowe would be playing for a team with a good offense, solid defense, and a great bullpen, not to mention pitching in mostly pitcher friendly parks against poor offensive teams. The Los Angeles Times believes that if the Angels lose both Teixeira and Sabathia, they will pursue free agent A.J. Burnett.
This story was approved by MLB Rumors.