A's Close In On Furcal?

Share All sharing options for: A's Close In On Furcal? 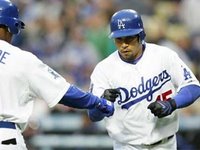 According to Ken Rosenthal, the A's met with free agent Rafael Furcal at the stadium, toured local communities where he could possibly live, and had a two-hour lunch with GM Billy Beane. The A's have yet to make a formal offer, but are believed to be preparing a multi-year offer. The Giants are also interested in the shortstop, as well as a third team, according to his agent. If the Athletics sign Furcal, Rosenthal expects the A's to then trade Bobby Crosby, possibly to the Orioles or Blue Jays.

The Athletics are also interested in Nick Johnson, and have reportedly expressed interest in Michael Barrett, but that has yet to be confirmed.