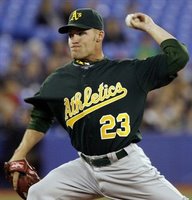 According to Ken Rosenthal, the Oakland Athletics are closing in on a deal for Rockies outfielder Matt Holliday. The deal is still a day or two away from being finalized, but sources believe that it will be Carlos Gonzalez, Huston Street, and Greg Smith that will go to the Rockies for Holliday. This trade is really coming out of left field. Not only does it go against the Athletics philosophy of bringing in young talent, but they went after a player whose numbers are extremely slanted by playing in Denver.
For the Rockies, they acquire a solid closer, and two solid prospects with lots of potential. Let's start with Greg Smith, who went 7-16 with a 4.16 ERA with the Athletics this past season. Smith started off strong, but failed to adjust and it showed after going 2-10 in the final three months of the season. Scouts told me that he failed to make the necessary adjustments to beat teams early, which allowed teams to score early. Not only that, but the bullpen failed to keep leads as well as keep them close after he came out. Playing in the NL and being relatively new to the league, he should get off to a strong start and continue to play well throughout 2009. As for Gonzalez, he will probably need some time in the minors but he has the potential to be force in Colorado. He is a strong lefty who hits to the gaps, but will also hit 20+ homeruns. However, Gonzalez is a lefty (along with Hawpe, Helton, and Stewart), and really struggled against them. Nevertheless, he will see a lot of good at bats hitting in the five spot behind Hawpe or Helton.
As for the Athletics, they get a power hitting outfielder who will help shape their lineup. We could see guys like Ryan Sweeney or Daric Barton improve by batting behind or in front of him. Not only that, but Holliday will give the Athletics a lot of leverage in negotiating with free agents. They have already made it known that they would like to sign Rafael Furcal to be their leadoff hitter, and he could be intrigued by the A's after the Holliday acquisition.
The Rockies, at least initially, are the winners with this trade. They acquired three solid players with a lot of potential who should help bring the Rockies back to the postseason. Not only that, but they cleared up a lot of payroll that could be used to go after an ace, perhaps CC Sabathia. Holliday is a great player, but he is no guarantee to stay in Oakland after this year and his numbers will likely fall playing away from Denver. We'll see what happens.