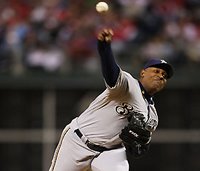 Milwaukee Brewers closer Salomon Torres has retired after twelve seasons in the big leagues. He had a great year for the Brewers this season going 7-5 with a career high 28 saves. He is 44-58 with a 4.31 ERA and 57 SV over the course of his career with the Giants, Mariners, Expos, Pirates, and Brewers. Torres retiring could trigger the Brewers to make a deal for a closer. The Rockies have indicated that they may shop Huston Street in a trade and the Brewers could jump in and offer Rickie Weeks and a prospect. They could be forced to bring back Eric Gagne, but he proved to everyone that he cannot handle the closer role.
This story was approved by MLB Rumors.