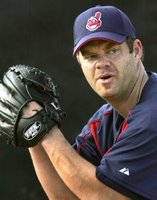 According to the Boston Globe, the Pirates may pursue free agent veteran Paul Byrd. Byrd was 11-12 with a 4.60 ERA with the Indians and Red Sox last season, and will be thirty-eight in a couple of weeks. While Byrd would help their rotation, the Pirates should spend their money on a power hitter to build their lineup around. They have LaRoche and McLouth, but bringing in someone like Milton Bradley or Juan Rivera would make them that much better.
Paul Maholm is finally reaching that point in his career where he will be able to beat his opponents more frequently. He went 9-9 with a 3.71 ERA in 31 games for the Pirates, but promising prospects Ian Snell and Zach Duke went a combined 14-26 with a 5.12 ERA. If the Pirates went out and pursued a pitcher like Jon Garland or Brad Penny, they would have a solid ace to shape a rotation around:
P Jon Garland
P Paul Maholm
P Ian Snell
P Tom Gorzelanny
P Zach Duke
Not to mention Russ Ohlendorf and Jeff Karstens also vying for spots in the rotation. Not only does the addition of Garland give the Pirates pitching depth, but it gives them an ace who would take pressure off everyone in the rotation to be the guy to win every fifth day. As for the offense, the Pirates don't appear willing to spend the money so they might just have to wait until their prospects are ready, or surrender a young pitcher for Marlins outfielder Jeremy Hermida, who they pursued at the trade deadline.
This story was approved by MLB Rumors.