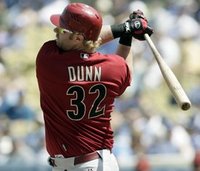 The Diamondbacks are reportedly having financial problems, causing them to cut ties with Randy Johnson, Orlando Hudson, Juan Cruz, and Adam Dunn. Dunn, who is a Type-A free agent, isn't drawing the initial interest that industry sources thought he would. Dunn has hit 40 or more homeruns over the last five seasons and is just twenty-nine. The Nationals are showing interest, as well as the Cubs, Rays, Royals, and possibly Angels and Orioles. For the American League teams, a lot depends on where Mark Teixeira signs. Teams that can afford Teixeira can definitely afford Dunn, who is looking at 15-17 million dollars annually.
One thing holding the Diamondbacks back from making an offer is the fear that he would accept it. The Diamondbacks are already working to trade Eric Byrnes, which would clear up the clog in the outfield and give them some more money to spend. Ken Rosenthal explains that offering Dunn arbitration is probably a safe bet considering his agents would have to decide by next weekend, a week before the Winter Meetings, to accept the offer or not. He goes on to say that if he accepts it, they could always trade him.
Drafting his been the Diamondbacks specialty as of late, so getting the two draft picks from Dunn would really benefit their future.
This story was approved by MLB Rumors.