Share All sharing options for: Giants, Angels After Sabathia 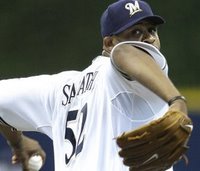 According to Tom Haudricourt, the Giants and Angels will enter the bidding for free agent pitcher CC Sabathia. The Yankees and Brewers already have offers on the table, and the Dodgers are still considering making him an offer. Several insiders believe Sabathia has not pounced on the Yankees offer because of his preference for the NL, so if the Giants make a solid offer, he could jump on it. Sources with knowledge of Giants plans have informed me that the Giants will make Sabathia an offer that will pay him more annually, but not as much in total contract. So a five year deal worth 100-115 million dollars makes sense.
This story was approved by MLB Rumors.