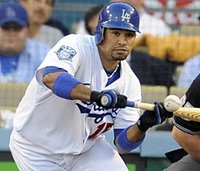 According to Rafael Furcal's agent Paul Kinzer, the Giants are showing serious interest in shortstop Rafael Furcal. Furcal believes the Giants can be "competitive quick," which really doesn't make much sense considering the Giants were last in the league in homeruns, RBIs, and second in the league for base on balls. Furcal is seeking a four year deal worth about 8-9 million dollars annually, and he will likely go to the highest bidder. The Cardinals, Orioles, and Tigers are showing varying degrees of interest in Furcal, among others, but the Giants may be willing to give Furcal the long term deal he wants.
The Giants need to build up their bullpen and structure a lineup around a power hitter, so it might be a better move to pursue Prince Fielder through trade or someone like Casey Blake on the open market.
This story was approved by MLB Rumors.