News and Notes: Montero to Yankees?

Share All sharing options for: News and Notes: Montero to Yankees? 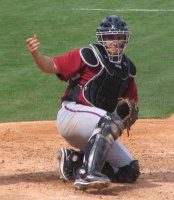 Diamondbacks catcher Miguel Montero is drawing interest on the open market, mostly because scouts believe he may be on the verge of a breakout season. Montero has some experience playing third base, but is most comfortable behind the plate. Montero combines his small frame with a quick swing that finds gaps and is known for having pretty solid instincts behind the plate. 16 of his 47 hits this season were doubles which comes out to a .255 AVG with 5 HR in 70 games. The Yankees, who are reportedly looking for a catcher in the event that Jorge Posada is not ready to start the season, could send a prospect to the Diamondbacks for Montero. Montero has drawn interest from the Red Sox, Giants, and Reds, among others, and it is possible the Diamondbacks might finally deal him.
In other news...
K-Rod likes Mets: Angels owner Arte Moreno informed media outlets that is time to turn the page on Rodriguez, which means they will look elsewhere. Rodriguez likes the Mets, and if there is mutual interest a deal will probably get done. The Cardinals and Indians are also interested.
Cubs won't sign Wood: Cubs closer Kerry Wood will not be back with the Cubs next season. Wood was reportedly holding out for a multiyear deal and the Cubs were only willing to go year to year. The Tigers, Red Sox, Diamondbacks, and Angels could pursue him.
Phillies interested in Burrell: The Phillies are showing some renewed interest in Pat Burrell, but only for a short-term deal. This means that they will have to pay him more annually, or he is gone. A two year deal worth 25-28 million dollars would probably get it done. The Royals have expressed interest in giving him a long-term deal, so he may be on his way out.
Mets interested in Garland, Wolf: The Mets are showing some interest in pitchers Jon Garland and Randy Wolf hoping that they will help shape the bottom end of their rotation. Both Garland and Wolf are being pursued by smaller payroll teams who may be willing to pay them more than the Mets or Dodgers.
This story was approved by MLB Rumors.