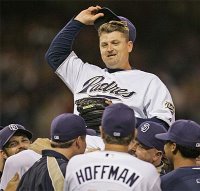 According to Buster Olney, the Padres have pulled their offer for closer Trevor Hoffman off the table. Hoffman has been the face of the franchise for the past decade, and it is a shame to see it end this way. Friends close to Hoffman reportedly believe the four million dollar offer was a way to get him to leave, citing the teams desire to cut payroll by trading Peavy, Giles, and ultimately saving by not signing Hoffman. The Indians pursued Hoffman in 2006 when he was last a free agent, and they may pursue him again now that he is a free agent.
Hoffman went 3-6 with a 3.77 ERA and 30 saves, so he could get a one year deal worth five or six million dollars. As for where he will go, it is hard to say. The Cardinals and Mets are pursuing Brian Fuentes while the Tigers and Indians are also eying closers. Hoffman will likely be picked up after the top closers are signed, so the teams mentioned above, as well as the Diamondbacks, Cubs, Rockies (if they trade Street), and Cardinals, among others.
This story was approved by MLB Rumors.