Share All sharing options for: Renteria Talking With Giants 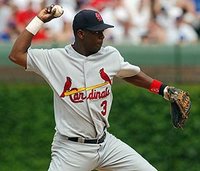 According to MLB.com, Edgar Renteria's agents are talking with the Giants. It is obvious the Giants want to sign a shortstop and will sign one soon, so which one will it be? Rafael Furcal will start make the market more clear because he takes one team off the market in the pursuit of Edgar Renteria, the next best available shortstop. It is believed that the A's have an offer on the table for Furcal, and the Giants are talking with him as well.

I expect some of these big names to sign fairly soon, teams often re-submit offers in the week before Thanksgiving, hoping to strike a deal before the break.