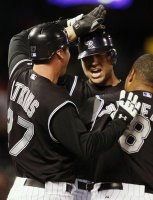 The first step back to the World Series for the Rockies starts with trading Matt Holliday and Garrett Atkins. While some may disagree, the Rockies have several solid prospects nearing the MLB as well as money to spend on the open market. The Yankees are reportedly interested in Matt Holliday, and have the prospects that would entice the Rockies. If they were to package a deal around Phil Hughes, that would be a huge step in getting the Rockies back to the World Series. The Rockies would be smart to target the Rays and their minor league prospects. They have made smart choices in the draft recently, so it makes sense that some of those young pitchers are close to reaching and having success in the MLB.
From there, if they trade Garrett Atkins for a solid position prospect, maybe Shin-Soo Choo of the Indians along with a pitching prospect, they would have a younger, cheaper, and potentially better team in 2009. However this works out, the Rockies need to make sure the prospects they acquire have solid potential and will help them all across the field. Ryan Spilborghs can successfully take over in left in 2009 and probably hit close to what Garrett Atkins did, if not better. Ian Stewart will be at third base, and a Jeff Baker or a free agent will take over at second. The Rockies won't be in the World Series in 2009 (at least not as of right now), but could set themselves up for a serious run down the road by trading Atkins and Holliday.
This story was approved by MLB Rumors.