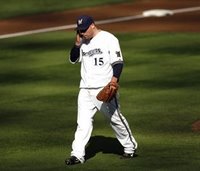 While the Brewers are open to bringing back Ben Sheets, they will likely let him walk and collect the draft picks. The Rangers are pursuing a trade for pitcher Scott Olsen, but may settle on a short term contract with a low base salary. Sheets is injury-prone, but when healthy he can be very effective. The Rangers are in desperate need of an ace, and could offer him a deal that would give him 8-11 million dollars. Sheets went 13-9 with a 3.09 ERA in 31 games this past season, his first time starting over thirty games in three seasons. Although he is a Type-A free agent, the Rangers have the fourteenth pick in the draft, and MLB rules state that you do not lose your first round draft pick by signing a Type-A free agent if your are in the top fifteen for the following years draft. Instead, they will lose their second round pick, which is okay considering they still will have a first round pick as well as one more if the Rangers lose Milton Bradley.
The Astros, Phillies, Indians, Giants, and Braves are all interested in Sheets, so his price could shoot up.
This story was approved by MLB Rumors.