Share All sharing options for: Teixeira to Red Sox? 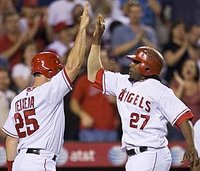 According to the Boston Herald, the Red Sox are very interested in first baseman Mark Teixeira. Teixeira is coming off a great year and is probably looking at 19-22 million dollars annually. The Nationals and Orioles are both interested in Teixeira, but it is hard to see him choosing the lowly Nationals over the Red Sox or Angels. However, Ken Rosenthal suggests that Teixeira could be intrigued by being the face of a young franchise, the same way Alex Rodriguez was with the Rangers. The Red Sox would need to move either Mike Lowell, Kevin Youkilis, or David Ortiz to open up a spot for Teixeira, so when the Red Sox start shopping one of those guys, we know talks are serious.
Bringing in Teixeira would make the Red Sox a force in the AL, and it would probably help them in their pursuit of free agent A.J. Burnett. At this point, the Angels are still the favorites.
This story was approved by MLB Rumors.