Share All sharing options for: Tigers After Tazawa, Closer 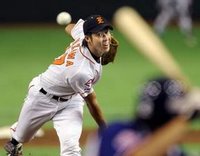 According to John Morosi, the Tigers are considering a run for free agent pitcher Junichi Tazawa. The list keeps growing for Tazawa, 22, who reportedly has a fastball that tops at 97 mph. The Tigers are not sure if they will make a serious run at Tazawa, but expect them to talk with his agents. The Red Sox, Mets, Phillies, Rangers, Cubs, Mariners, and Dodgers are among several other teams that are reportedly pursuing Tazawa, so he is likely in for a big deal. At this point, it is hard to say where he could go, but you have to expect that the teams with a Japanese presence would be favored over other teams. With that said, the Red Sox, Dodgers, Cubs, and Mariners probably match up the best.
The Tigers also plan to pursue a closer, and may be forced to trade prospects Matt Joyce or Jeff Larish to bring one in. The Tigers will likely contact JJ Putz and Huston Street before looking to the free agent market, but don't be surprised if they sign Chad Cordero or Jason Isringhausen as well.
This story was approved by MLB Rumors.