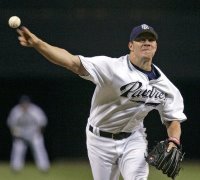 According to Tim Brown of Yahoo! Sports, Padres GM Kevin Towers says that he thinks he found a third team willing to send a standout pitcher to the Cubs, who would then package that player with others to the Padres for Jake Peavy. Towers and Cubs GM Jim Hendry will talk following the holiday, and they will try to get a deal done before within the next couple of weeks. If the Cubs can land the standout pitcher, probably losing Felix Pie, Mike Fontenot, or a different top prospect, it would only be a matter of time before the Cubs and Padres get their deal done. It is believed that the Padres and Cubs have agreed on certain players to include, it is just that they are waiting for the stud pitcher to focus the deal around. Josh Vitters, Sean Marshall, and others, are believed to be apart of the deal that would bring Jake Peavy to Chicago.
As for who the third team could be, no one knows. The Rays, Nationals, Twins, Rangers, Red Sox are a couple teams that may be willing to deal a top prospect for a pair of prospects.
This story was approved by MLB Rumors.