What Will The Blue Jays Do?

Share All sharing options for: What Will The Blue Jays Do? 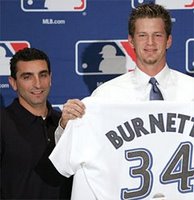 Blue Jays interim CEO Paul Beeston told the Toronto Star earlier this week that the Blue Jays will not be players in the free agent market. This comes as a surprise to many who have heard the Jays mention Rafael Furcal, Jason Giambi, and Raul Ibanez as possible targets. However, sponsorships are down and while season tickets are "consistent," the plummeting value of the Canadian dollar might force more season ticket holders to forego their tickets.

The Blue Jays can spend at least 24 million dollars on the market. That is the money that would have gone to A.J. Burnett if he hadn't opted out of his contract. The Blue Jays could pursue a guy like Felipe Lopez to help out at shortstop, but his price might rise now that several teams are going after him. The Blue Jays will need a number two starter behind Roy Halladay, and who would be a better stop-gap than Randy Johnson? Bringing in Johnson would not only sell tickets, but it would allow Dustin McGowan to come back strong in the four or five spot of the rotation. While this is merely speculation, it would limit the amount of trades the Blue Jays have to make, a weakness of GM J.P. Ricciardi's.

As for low-cost players they could trade for, they could work a deal, with prospects of course, to acquire Jason Marquis. Marquis is in the last year of his three year deal and is coming off a strong 2008 going 11-9 with a 4.53 ERA in 29 games. Marquis has averaged 15 wins over the last five seasons, and will only make 9.87 million dollars in 2009.

If Ricciardi does not make improvements, he will be an early candidate to be fired if the Blue Jays are not off to a good start in 2009.