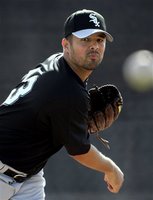 The White Sox have indicated that they will attempt to trade Javier Vazquez this offseason, despite having two years and twenty-three million dollars left on his contract. Vazquez went 12-16 this past season, but won 15 games the year before. Several teams are pursuing pitchers through trade, and may turn to Vazquez if they miss out on Jake Peavy or Scott Olsen. With that said, the Phillies could make a move for him. They have a history of trading with the White Sox and this type of trade would be no different. Other possibilities include the Dodgers, Indians, Braves, and Astros.
The White Sox announced yesterday that they will move Alexei Ramirez to shortstop next season, suggesting that they will pursue a second baseman this offseason. Joe Crede is gone, and Josh Fields is taking over, so don't expect the White Sox to go with two in-house options for 2009. They have money to spend and will likely pursue Orlando Hudson on the open market. The White Sox have been interested in Chone Figgins for a long time, and may look to include Vazquez in a deal involving Figgins.
This story was approved by MLB Rumors.