Will The Jays Be This Year's Mariners?

Share All sharing options for: Will The Jays Be This Year's Mariners? 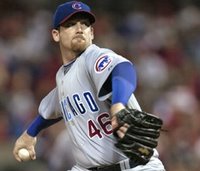 Will the Jays, desperate for pitching, swing for the fences and break the bank for a free agent pitcher? Last offseason, the Mariners dished out 48 million dollars to Carlos Silva, who set a career high in ERA (6.46). It is hard to sell Toronto to a pitcher when several top market teams are pursuing the same guys. The Blue Jays have contacted A.J. Burnett, Ryan Dempster, Derek Lowe, and Ben Sheets, but all four of those guys have also been contacted by the Yankees, among other teams. Right now, their best bet is A.J. Burnett, who, from what I am hearing, is leaning towards returning to Toronto.
If Burnett leaves, the Jays will need to sign a pitcher quick so they have some leverage in negotiations with position players like Rafael Furcal or Jason Giambi. After Burnett, their best bet is Ryan Dempster, who is from Canada. Dempster has told the Cubs he would like to hear what other teams have to offer, which would suggest he would go to the highest bidder. Dempster was the "X-factor" for the Cubs this season and he is in for a big raise. However, he tripled the amount of innings he pitched in as well as had ridiculously high pitch counts consistently. Making a long term investment might not be the best idea for the Jays.
This story was approved by MLB Rumors.