A's Closing In On Furcal?

Share All sharing options for: A's Closing In On Furcal? 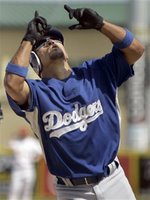 The Athletics have offered Rafael Furcal a four year deal worth 40 million dollars, ESPN's Buster Olney is reporting. Furcal can have a major impact on any team he plays for, but whether he can stay healthy is the big question. He played in just 36 games for the Dodgers last season, hitting .357 with a .439 OBP. The Dodgers and Royals are also interested, but the Royals have to find a taker for Jose Guillen, who will make 24 million dollars over the next two seasons. As for the Dodgers, they still have holes in their lineup and cannot put too much money on the table without getting a sense of the market at other positions.
The Athletics will likely offer Furcal different salary amounts over the course of the four seasons. This way, it will benefit their payroll as well as entice Furcal to sign the deal.
This story was approved by MLB Rumors.