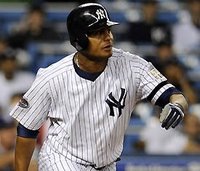 The San Francisco Chronicle is reporting that the Athletics and Bobby Abreu have begun preliminary discussions. Abreu, who hit .296 with 20 HR in 156 games for the Yankees, is also drawing varying degrees of interest from the Cubs, Mets, and Angels. The A's hope to sign Jason Giambi, but won't back down from his demands for a three year deal. Talking with Abreu could be a ploy to pressure Giambi to stepping back from his demands, but the A's have had interest in Abreu all offseason. They like his consistency at the plate, his solid defense, and willingness to steal bases.
Talks are in their early stages, but could pick up if they find that Abreu is their only realistic option.
This story was approved by MLB Rumors.