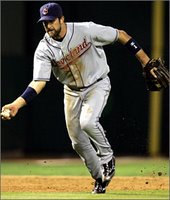 According to the Minneapolis Star Tribune, the Twins have broken off talks with with free agent Casey Blake and are going to pursue other options. Indications are that the Twins were not willing to guarantee three years, offering just a two year deal with an option. The Twins have to pull something together to find a corner infielder and a shortstop, but don't appear willing to give up the prospects. The Rockies are asking for Kevin Slowey and Denard Span, a price way too high for the Twins.

As for free agents, they could go after Orlando Hudson and play Alexi Casilla at shortstop, but Hudson has a history of injury problems. They will likely resign Nick Punto and play Buscher at third, mostly because there aren't any solid replacements available. They could go after Joe Crede, but we won't know anything till the Winter Meetings.