Share All sharing options for: Cardinals Backing Off Fuentes 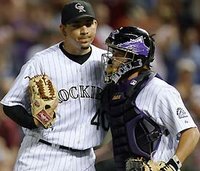 The Cardinals have become frustrated with the Brian Fuentes talks and are moving on, KSDK is reporting. When I spoke with Cardinals manager Tony La Russa, he said Fuentes was their number one target, but they have other options. That doesn't necessarily mean they are going after Trevor Hoffman, but guys like Brandon Lyon or Eric Gagne are legitimate possibilities. The Cardinals have had a two year offer on the table for Fuentes for the past week, believed to be worth about 17-18 million dollars.
Fuentes is reportedly holding out till the Mark Teixiera sweepstakes are over because of his interest in joining the Angels. However, Angels officials have said repeatedly that are content with in-house options at closer. This could be a ploy by the Cardinals to speed up the process, but a deal breaker would probably be giving him the same deal the Indians gave Kerry Wood (2/20).
This story was approved by MLB Rumors.