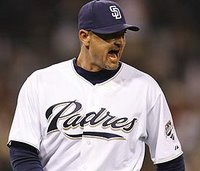 According to the San Diego Union-Tribune, the Dodgers are interested in free agent closer Trevor Hoffman. Hoffman, the all-time saves leader, said last week that he would listen to offers from any of the twenty-nine teams in the market for a closer. One executive, who requested to remain anonymous, said that comment is "probably directed towards the Dodgers." The Dodgers are reportedly looking for a veteran pitcher to mentor their young staff, and Hoffman would definitely fill that void. Not only that, but there is a lot of question surrounding Takashi Saito's health.

Hoffman went 3-6 with a 3.77 ERA and 30 SV, and a switch to the Dodgers probably wouldn't effect his numbers too much. He would be playing in the same division with a fairly similar schedule. The Dodgers are currently working with Manny Ramirez, as well as exploring the possibility of acquiring Robinson Cano, so they have a pretty full plate heading into the Winter Meetings.

The Indians also have some interest in Hoffman, but talks have yet to get serious.