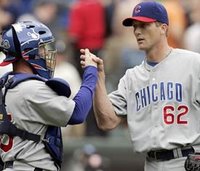 The Giants have agreed to a one year deal worth 2.75 million dollars with relief pitcher Bob Howry. Howry, who went 7-5 with a 5.35 ERA in 72 appearances for the Cubs, will likely be the Giants' setup man. The Giants are doing what they can to improve their bullpen, mostly because they gave up the third most homeruns in the league in the least amount of innings pitched. They already signed Jeremy Affeldt, and bringing in Howry gives them a lot more options in the later innings. Howry is one of the top late inning relievers in the game, who in eleven major league seasons has a 3.68 ERA. Howry struggled in 2008, but compiled a 2.92 ERA from 2004-2007 in 278 appearances.
It will be interesting to see if the Giants pursue any more bullpen help.
This story was approved by MLB Rumors.