Share All sharing options for: Gregg Maddux To Retire 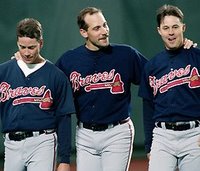 Four time Cy Young winner Greg Maddux is set to announce his retirement Monday, according to FOXSports.com. Maddux, who went 8-13 with a 4.22 ERA this past season, was 355-227 with a 3.16 ERA in twenty-three major league seasons. Maddux will certainly be a first-ballot Hall of Famer, likely pushing Mike Mussina's chance of getting in back at least one season. Maddux has also collected eighteen Gold Gloves, and is known for incredible command on the mound.
He will likely go into the Hall of Fame as a Brave, mostly because he won a World Series there in 1995. His two closest teammates, Tom Glavine and John Smoltz, are both recovering from surgery and it is possible the Braves won't have the money to spend to bring them both back. They recently took on Javier Vazquez's contract and have extended a five year offer to A.J. Burnett worth 75 million dollars. It would be great to see the Big Three go in to the Hall of Fame together.
This story was approved by MLB Rumors.