Mets Closing In On Lowe

Share All sharing options for: Mets Closing In On Lowe 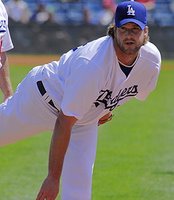 According to Gordon Edes of Yahoo! Sports, the Mets are deep in negotiations with free agent pitcher Derek Lowe. Lowe, who was 14-11 with a 3.24 ERA in 34 games last season, also has an unbelievable postseason track record. I spoke with Omar Minaya down in Las Vegas and got the sense that pitching was a priority this offseason, both starters and relievers. They added two relievers, locking up the late innings and pushing back the guys who had pressure on them to close the late, important games. "Well, signing K-Rod and Putz will do exactly that," Minaya said when asked about the Mets' bullpen. "Guys like Sanchez, Pedro [Feliciano] will be able to work in roles they are comfortable with."
Adding Lowe, one of the most durable pitchers in baseball, will make for a great number two pitcher behind Johan Santana. This is a great move by the Mets.
This story was approved by MLB Rumors.