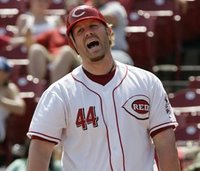 The Orioles failed to land their top free agent target, which altered their whole offseason agenda. They are currently negotiating with free agent pitchers Tim Redding, Braden Looper, Mark Hendrickson, and Japanese pitchers Kenshin Kawakami and Koji Uehara. They failed to sign Nick Markakis long term, as well as Brian Roberts, so bringing in a power hitter like Dunn would help their offense down the road, as well as show Roberts and Markakis that they are committed to winning.
Dunn's price, currently around 14 million dollars annually, is a bargain for some teams. Hitting forty homeruns last offseason would have landed him a 16-18 million dollar deal. Despite a low average, he does get on base and drive in runs. The Nationals are currently his top suitor, but we should know after the holiday break.
In other news...
Matsui to Angels?: The New York Post suggests the Angels as a possible suitor for Hideki Matsui. Matsui isn't great in the field, but he can still produce at the plate. If they didn't have to give up much in return, it wouldn't be the worst move, especially if they take on Brian Fuentes.
Red Sox still eye catcher: The Red Sox are still looking for a catcher, and have set their sights on Jarrod Saltalamachhia of Texas and Miguel Montero of Arizona. The Diamondbacks are closing in on an extension for Chris Snyder, so trading Montero now is a possibility.
Cardinals pursuing Perez?: The Cardinals remain interested in free agent pitchers Oliver Perez and Randy Wolf. Perez would be great for their rotation, but if they want to cooperate with Boras again is the other question.
Nationals talking with Hudson: The Nationals are very interested in second baseman Orlando Hudson.
This story was approved by MLB Rumors.