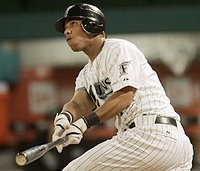 According to the Hot Stove Blog, the Pirates are still after Marlins second base prospect Robert Andino. Andino, once considered a Marlins top prospect, is out of options and will have a tough time making the roster. He has hit .201 in 144 at-bats with the Marlins over four abbreviated seasons, but hit .287 in 43 games in Triple-A last season. The Marlins are reportedly looking at Brian Bixler, a middle infielder who still has options. Bixler hit .157 for the Pirates last season, but is a .284 career hitter in 533 career minor league games.
A trade involving Robert Andino looks imminent.
This story was approved by MLB Rumors.