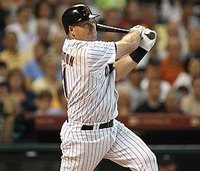 Add the Pirates to the list of teams going after Ty Wigginton. The Indians, Giants, and Twins are all pursuing Wigginton, who was non-tendered this past weekend. Wigginton made 4.35 million dollars last season, and could receive as much as 7 million dollars after hitting .285 with 23 HR in 111 games. Wigginton last played for the Pirates in 2005, but struggled hitting .258 in 58 games. He might be more intrigued by playing for the Giants or Twins. Both teams have solid pitching, and would have even better hitting with the addition of Wigginton. Nothing appears imminent, so we might not hear anything until after the New Year.
This story was approved by MLB Rumors.