Red Sox Close In On Penny

Share All sharing options for: Red Sox Close In On Penny 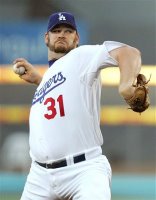 Ken Rosenthal is reporting that the Red Sox and Brad Penny are closing in on a one year deal. A lot of language still needs to be worked out, but Penny could take a physical in the next week or so. This is a solid move by the Red Sox, who bring in a cheap ace who could put up big numbers. Not only that, but it allows them to keep Clay Buchholz in the minors or spot starting with the Red Sox.
If Penny, 29, can return to 2007 form, it is possible the Red Sox would be open to trading Daniel Bard, or perhaps Clay Buchholz. Buchholz could net them a potential All Star catcher in Jarrod Saltalamachhia, or a better prospect if he shows improvement. The Red Sox could probably lock up Penny, probably at a good price too if the economic crisis doesn't bottom out and turn around. However, if both find success, the Red Sox would likely move Penny for prospects and give Buchholz the everyday job. Ugh, it's not even January and I'm already speculating!
This story was approved by MLB Rumors.