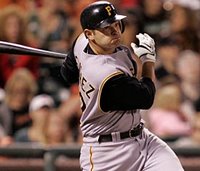 The Indians are in the market for a closer and a second baseman, but may only want to splurge on one. If the Indians target a closer like Brian Fuentes, they could use a prospect or two and pursue Pirates second baseman Freddy Sanchez. According to the Beaver County Times, the Pirates are considering moving the second baseman, who hit .271 with 9 HR in 145 games. However, Sanchez is a career .300 hitter with two years left on his contract. He will make six million in 2009 and has an eight million dollar option for 2010, with a 600 K dollar buyout.
The Indians have interest in Orlando Hudson, but he is reportedly asking for 12 to 13 million dollars annually. That is a lot for a second baseman, especially one who has a history of injuries. Working with the Pirates is risky though, considering Neal Huntington hand picked most of their young minor league talent when he was with the Indians. Other options for the Indians include Brian Roberts, Robinson Cano, Luis Castillo, and Mike Fontenot, among others.
This story was approved by MLB Rumors.