WIll The Red Sox Go After Pettitte?

Share All sharing options for: WIll The Red Sox Go After Pettitte? 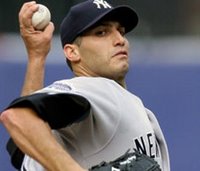 The Red Sox have made it clear this offseason that they will explore any avenue that could make their team better. There were reports at the Winter Meetings that the Sox had interest in Andy Pettitte, but talks broke off when Pettitte started talking exclusively with the Yankees. Pettitte is reportedly holding out for 16 million dollars, but the Yankees are reportedly getting close to pulling their 10 million dollar offer off the table, which could allow the Red Sox to jump in and sign him at a relatively cheap price.
Pettitte, who went 14-14 with a 4.54 ERA with 158 strikeouts in 33 games, has a great postseason record and would be able to mentor some of their young pitchers. Not only that, but he is extremely familiar with the division and pitching at Fenway Park. Bringing him in for a one year deal can't hurt, especially if they can't land someone like Ben Sheets.
This story was approved by MLB Rumors.