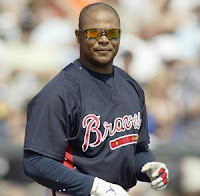 According to ESPN.com, the Braves are discussing the possibilities of bringing back free agents Tom Glavine and Andruw Jones. Tom Glavine will be reviewed by doctors next week before the Braves decide whether or not to offer him a contract and Jones is still being reviewed and discussed by Braves officials. Jones is also being pursued by at least eight other teams, but he is going to have to prove that he can play before anyone offers him a major league contract. The Nationals could be a suitor for Glavine, but it isn't likely at this point.