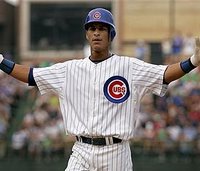 Cubs shortstop Ronny Cedeno, who is out of options, is drawing interest from several teams. The Cubs are hoping to get a starter out of the deal, which makes sense since his name has been involved in the Jake Peavy talks. Cedeno hit .269 with 2 HR in 99 games for the Cubs last season, which included a .378 average in the month of April. Cedeno hit .286 with 4 HR in 48 games in Winter League, and many think his improved presense at the plate will only get better. Don't rule out Ronny Cedeno beating out Aaron Miles and Mike Fontenot for the job at second base.

The Mariners have shown interest in Ronny Cedeno and may be willing to part with Aaron Heilman, Bruce Levine is reporting. Heilman struggled in 2008, but had a 3.03 ERA in 2007 and a career 4.24 ERA. He hasn't made a start in three seasons, but he would give the Cubs another reliever, fortifying the bullpen. Cedeno was also connected to the Royals when the Cubs asked about Zack Grienke, but that rumor died when the Royals said he was not available.

Cedeno's improved patience and defense makes him a very valuable player. I wonder why the Cubs feel the need to trade him, especially after trading young prospects Felix Pie and Eric Patterson in the past six months.