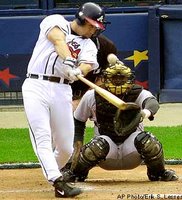 The Cubs are close to signing back up catcher Paul Bako to a one year, 500,000 dollar deal. Bako will replace Henry Blanco as the teams back up catcher, saving the Cubs close to one million dollars. Bako hit .217 with 6 HR in 99 games for the Reds last season, and threw out 22-of-55 base stealers. Bako is a former Cub and is familiar with a couple of Cubs pitchers, but he has played for four teams in the NL Central, so he could help from a scouting standpoint. One problem I have with this deal is how much Soto, the 2008 NL Rookie of the Year, commented on how much Henry Blanco helped him on and off the field last season. Soto still has a lot to learn, and it's too bad Blanco won't be there to help. Hopefully it doesn't affect him.
When it comes to back up catchers though, Bako is one of the best.
This story was approved by MLB Rumors.