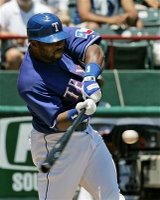 The Cubs and Milton Bradley have come to terms on a three year deal worth 30 million dollars, ESPN.com is reporting. Bradley is an above average defender, but is oft-injured, having averaged just 92 games per season throughout his whole career. However, Bradley is entering his prime and it showed last season when he hit .321 with 22 HR and .436 OBP in 126 games for the Rangers. The Cubs seem to have an eye for snatching players coming into their prime, acquiring Aramis Ramirez, Derek Lee, Michael Barrett, and Mark DeRosa over the years. The problem I have with this signing is that Bradley is expected to play 140 games in the toughest position in Wrigley Field, but hasn't had a 140 game season since 2004.
One thing this signing does do is open up a spot for Micah Hoffpauir, who is now second on the depth chart. Hoffpauir hit .342 with 2 HR in 33 games last season for the Cubs, but hit .362 with 25 homeruns in 75 games for the Triple-A Cubs. If Bradley goes down, or needs a day off, the Cubs will have no problem slotting Hoffpauir, Johnson, or Pie in right field.
This story was approved by MLB Rumors.