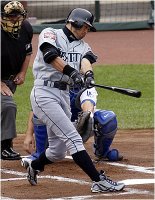 According to ESPN.com, tourism officials in Tucson, Arizona want to bring one of the Japanese baseball clubs to Tucson to play in up to fifteen Spring Training games against MLB teams. A Spring Training complex in Tucson has been vacated by the White Sox moving to Phoenix, which some think should now be used as a year-round international player developmental center. Tourism Authority chairman Tom Tracy said Major League Baseball is open to a Japanese team coming to play during Spring Training, but nothing will happen till next season, at the earliest.
I am a big supporter of Major League Baseball and Japanese Baseball connecting to play some games during the season. Players have often complained about the time change and how it effected their game, but if it were for a long period of time, it probably would not be a problem. As for the idea of making it a developmental center - similar to ones in Australia, Italy, and the Dominican Republic - would be another way to connect fans to the minor leagues and the development of young players.
This story was approved by MLB Rumors.