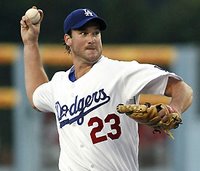 The Nationals, who are in need of an ace, may target free agent pitcher Derek Lowe. Lowe is reportedly far apart in negotiations with the Mets, and plans to meet with the Braves in the next day or two. The Nationals obviously have the money to bring in a pitcher like Lowe, who is seeking a three-four year deal worth 15-16 million dollars annually. The Nationals have historically been a team that does not go after top of the line pitching, but after a 59-win season, something needs to change.
Lowe, who went 14-11 with a 3.24 ERA in 34 games, is also being pursued by the Phillies.
This story was approved by MLB Rumors.