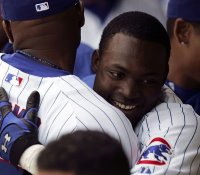 The Orioles have traded Garrett Olson and Henry Williamson to the Cubs for top prospect Felix Pie. The Cubs are frustrated with Pie's performance in the major leagues, despite only giving him 287 at-bats. Olson will likely compete for the fifth spot in the rotation with Sean Marshall, but it is possible the Cubs will try to revive talks for Jake Peavy now that they have all the pieces the Padres originally asked for. Pie could start in left field for the Orioles, but might need to prove himself before the Orioles let that happen.
Pie has the potential to be an All-Star player, combining speed, power, and excellent instincts. He is coming off a strong final month of the MLB season, and a solid Winter League season, so he could hit the ground running in 2009. Olson might fare better in the National League, but he has a high WHIP and is a fly ball pitcher, so pitching coach Larry Rothschild has some work to do. As for Williamson, he has solid strikeout numbers and has the makings of a decent reliever, but he is a long way away from reaching the majors.
This story was approved by MLB Rumors.